Received the drone and it looked like a pretty good product. Went through the complete calibration process and the app was pretty nice and comprehensive. The video feed looked HD and beautiful! I took the drone up 60 feet to take some pictures and video, but after the third photo the drone PLUMMETED TO THE GROUND! No warning, no actions on my part.... just snapped a picture and like a rock, down she went!!! TWO whole minutes of flight time and a smashed gimbal! Back in the box it went, requested a refund and cancelled the CC charge. I really like the company and their effort to complete with DJI, but this drone LITERALLY fell short (like 60' out of the sky short)! Wish I had better news but this product is absolutely unstable and not worth the purchase. 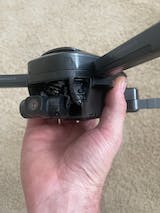 M
EXO Drones Matt F
Get a DJI not an EXO

I've had this drone for a couple weeks now and I'm kinda sorry I settled for an EXO. The drone flies ok, it has a few stupid things like, if you forget to take off the gimble cover it yells at you in a bad Asian accent and you can't make it go away unless you power off the drone. Also the remote is cheap plastic and you can't remove the joysticks for storage. They say you get these cool videos on how to shoot videos with tour new drone. Nope. Nothing. Once they take your money you cannot get ahold of them. I've messaged their "Pilots", nothing. I've left multiple emails, nothing. They have no phone number posted on their website. They say they have 4k video. It has lines across it and you can see the propellers in the corners of the video. The video quality doesn't seem to be any better than anything else.

I bought this drone for my real estate business. The drone itself is fine. Good camera. The controller (I have had 4) leaves a lot to be desired. The app continuously disconnects and says "usb disconnected", even in mid flight- which causes a lot of problems, it took me about 45 minutes to get it to connect to shoot a property yesterday. I have had this drone for a month and a half now, and the batteries wont charge. I have contacted customer support multiple times and found one helpful person. This morning I have been trying to get an answer on the batteries and was simply told "don't worry, its charged." well no, its not- I have connected it to my phone and it is 36% charged.. very very frustrating. I give the drone an overall rating of a C+ solely because the camera is decent and the one good customer service rep I have had.

had an issue with drone falling out of sky less than 3 weeks after purchase getting it replaced was quick and easy, they even shipped the new 1 before the broke drone made it there. live support most times avail.

Ordered a Zino Pro Plus which arrived, and failed on its very first test flight--an automatic take off to 2 meters, followed by automatic landing, at which it flipped over on its back and the left rear motor would no longer spin up. I got customer service on chat immediately. They instructed me to send the drone back and that it would take 6-9 weeks to repair. However, they said, if I wanted to fly sooner, they would sell me a replacement drone at a discounted price ($300 instead of $349) that would ship out as soon as I gave them a tracking number that they could use to verify my return was on the way. I followed all these instructions; paid for the replacement, and shipped the return from UPS with professional packing and insurance (costing an additional $100). They did not ship the replacement right away--took several prompts and about a week. It did arrive then, in used and torn packaging. The drone itself is wonderful, I have nothing but good things to say about this Zino Pro Plus. Then more trouble: I asked Exo if this was my original drone repaired, or a reconditioned replacement: no answer. I waited a week or so, then asked when I could expect reimbursement for my return. I got an email back saying there would be no reimbursement because I had not purchased "replacement insurance." I pointed out (both by return email and by the chat---and they only occasionally answer chats, despite all the claims of immediate response) that I had paid them for TWO drones, and RETURNED ONE per their instructions, and that I now had one (used?) drone at the end of all this. I got no response to the email and one chat response saying "standby" while they checked the account....then nothing. The irony is that during the purchase of the replacement drone there was a check box to give them a tip, which I did, bringing that one to full price. So, while I am very pleased with the drone itself, I ended up paying about $800 for this whole process, and am extremely disappointed with what is either (charitably) total disorganization at Exo Drones or (less charitably) dishonest business practice.

I've liked it so far. Not a bad drone, support is really nice

The support was awesome, definitely got my moneys worth. Spent a long time chatting with the awesome guys at EXO, and the drone was quite easy to use. Support 10/10, quality of drone like an 8/10. I got the ranger, isn't like fully professional, but for the price unmatched. Better than my old DJI spark

Hi, got my ranger about 4 weeks ago and had it flying within 5 minutes. Battery came charged and i just followed the quickstart video and was super easy. My instagram game just got a lot better, and I didn't expect to be getting expert shots so quickly. Drones seemed like sucha commitment, but it was actually completely different than I thought with the EXO Ranger. they weren't kidding about the whole 'drones for anybody' thing. Would reccomend to anyone who just wants to get flying without having to learn about aviation or robotics or anything